“Down to Earth” is a story about an organization in the spirit world who develop the technology to show people what spirit world is like with live interactive views. We follow this group from the first break-through to full stadiums streaming to live worldwide television audiences seeing heaven for the first time. The Earth is introduced to the awe-inspiring higher realms and also the dark, ugly and hideous lower realms. The outreach from heaven and the response creates a dramatic and heart inspiring story. It is told from a very personal view with humor, love, mistakes, growth, forgiveness and successes.

Spirit world is fed by people living our lives on Earth and then on “death” transitioning into our next stage of life bringing with us all our spiritual growth, experiences and beliefs. In “Down to Earth”, this organization in Heaven, composed of former mediums, religious leaders, scientists and other interested people, carefully plan how to show through live interactive views (like Zoom meetings), the reality of actual life in the spirit world. This includes sensitive planning to address the world’s major religions: Catholic and Protestant Christianity, Islam, Buddhism, Hinduism and reaching the general populations. There is opposition from different sources to this new message, but slowly more general acceptance. A website is set up where people on Earth can ask questions and receive answers from live spirits, along with video. Finally spirit centers are set up around the world where people on Earth can see/hear their loved ones in the spirit world.

From one story in the book; outside the stadium during a show in Thailand a Buddhist monk sets himself on fire to protest this new view of our afterlife. Later in a show in Estonia that Buddhist monk, who is now in heaven, comes on weeping to apologize to the world and to express his heartfelt gratitude to those in this group who helped him see the reality of spirit world and also the goodness that Buddhism was teaching.

2. What is the main message of “Down to Earth”?

It doesn’t matter your religion or even what you believe in, but how you live your life. How kind you are, how much love you share, how considerate and respectful to others, how close you are to resembling God’s nature of love, service, selflessness, this is what determines what level of spirit world we start at. But we can always grow, there is no eternal hell, God loves his/her children too much. We are all destined to become one with God, to know a love we can’t begin to imagine. The closer we resemble our source, God, Love, the higher, more refined our spirits are.

Around 40 years ago I read Anthony Borgia’s three book series, “Life in the World Unseen,” which was received/channeled from a Catholic theologian, Monsignor Robert Hugh Benson (1871-1914), who on entering spirit world wanted to correct the official missives he wrote for the church. These books tell in great detail actual life in spirit world. Also at that time I read, “A Wanderer in the Spirit Lands” channeled to A. Farnese, which tells the story of a man who starts in the lowest hell and through love from his fiancé is able to progress slowly through different levels until he is finally in the levels of light.

My favorite books presently are: “Voices of Love from the Light, Conversations with 20 Great Souls in the Afterlife” by Philip Burley (2018) and “Every Day God” by David and Takeko Hose (2000).

My purpose of writing this novel is to add my voice to the volume of knowledge growing about what the spirit world is actually like. Since the beginning of mankind, we humans have always had experiences with spirits and there are tons of stories about ghosts and spiritual phenomenon but it is always from the Earth side. I knew for many years that I wanted to write a novel about spirit world and to write it with the narrator telling the story from the spirit world. That meant a lot of research into actual life in the spiritual world. Are there homes, mountains, rivers, oceans, animals, trees, flowers? What do people do there? How do people travel, what do they do for “work”, for fun? Who are the leaders? How do they lead? How do our lives on Earth affect our spiritual destination? What are the different levels like? Can we grow to higher levels? How do we grow?

I also know when I arrive in spirit world I will be in awe and know I barely began to scratch the surface with this book.

4. You had a brother who was an atheist who died. Can you share a little bit about that experience. Did you have any conversations with him about the spirit world before he died? Many people believe that atheist can not go to heaven or experience God in the afterlife because they do not believe in God. What are your thoughts on that topic? 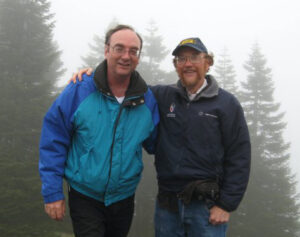 My older brother, Allen, was a scientist and engineer with 21 patents, and a lifelong atheist. He was a good man, involved in this community of Corvalis, Oregon working in computer research and development. He started a robotics club at the local high school and had many nerdy science-fiction loving friends. In 2013 as he was dying of cancer I visited him up from Southern California. I was amazed to see on his wall a schedule of 12 of his friends volunteering to assist him with morphine pumps, food prep, companionship for two weeks giving him non-stop 24 hour care. I took one of those days. He was in pain and could no longer lie down but leaned on pillows on his kitchen table. He died the day after I left of doctor-assisted suicide, with no regrets about his life.

We never tried to convert each other, with me always searching for God and truth. I said to him as he rested on the pillows that there are groups in spirit world, scientists and others working with like minded people on Earth to create a bridge between the two realms and that maybe he, as a scientist, could work with them in the spirit world. I was not hoping for a last minute conversion. Our beliefs are powerful, and an atheist who believes in nothing after death could be stuck in the blackness he believed in. I wanted to give him a way out of that trap. I hoped that after he died he would realize he still had awareness and could remember what I had said and wake up to a good life in spirit world.

I had a zoom meeting with a very gifted medium and found that Allen, though not in the highest spirit level, is at least in a level of light and is excited about life there. He says he was wrong and was grateful to me. He doesn’t believe in the God taught by Christianity but that “here, God is all around”. What I said helped him. He also said our paternal grandmother woke him up and told him it was time to start living his life in spirit world. (ha ha go grandma!)

Don’t judge them, don’t try to convert them as your beliefs may not be 100% correct either. Love them, serve them, be kind and considerate always. You will see them again. If you begin at a higher level you can help them grow, and if they end up at a higher level they will remember your kindness and help you grow.

6. You mention there are scientists on Earth and in the spirit world who are working to bridge the two realms. Can you talk a little bit about the research in EVP and ITC and what that has shown to help support your belief in the Afterlife?

There are hundreds of scientists involved in both EVP (electronic voice phenomenon) and ITC (instrumental transcommunication) all over the world. Here I’ll introduce two scientists working for decades on ITC, and I have had brief interactions with, Mark Macy and Anabela Cardoso. I have books on ITC from both authors.

Mark Macy is the leading American Scientist involved in ITC. His websites are: https://macyafterlife.com/about/ and  https://noblesavageworld.com/. Mr. Macy says on his site, “I’ve been immersed in a frontier field of research called ITC, the use of technologies to receive voices, images, and text from the finer worlds of spirit. I helped establish an international ITC panel that was able to sustain communications for a number of years with brilliant minds beyond our world—those who are sometimes called spirits and angels and ethereal beings, and who streamed pure, earth-changing information to us through our technical equipment.”

Anabela Cardoso is a Portuguese scientist who has been involved in ITC research since 1989 and has worked with a number of scientist in Europe, South America and the United States. She gives precise detail in her book, “Electronic Contact with the Dead, What do the Voices Tell Us?” on the extensive setting up of the enviroment to show there is no possible outside source of the communication she receives except from the spirit world. Her website is: http://www.itcjournal.org/ 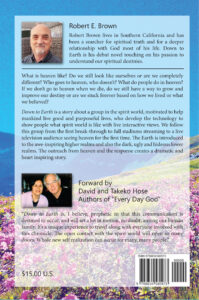 I’ve been in email contact with both Mark Macy and Anabela Cardoso and sent each an earlier copy of “Down to Earth.”

EVP or electronic voice phenomenon is the recording of electronic audio only from the spirit world and has been pursued since 1941 but with greater success in the 1970s up to the present day. See: https://en.wikipedia.org/wiki/Electronic_voice_phenomenon

I am profoundly grateful to Dr. Matthew Welsh and Spiritual Media Blog for giving me this chance to share about my book, “Down to Earth.” Thank you!

I would love to hear your thoughts on “Down to Earth” and set up a Facebook discussion group at: https://www.facebook.com/groups/downtoearthnovel

And to ask me questions or share input a dedicated email: downtoearthnovel@yahoo.com

Which Stranger Things Character Are You, Based on Your Zodiac Sign

7 Meanings of Turkey Symbolism – What is The Meaning of Turkeys Crossing Your Path?

Top 6 Dreamers Of The Zodiac

The 3 Zodiac Signs With Rough Horoscopes On September 25, 2022